Alcoy, Manresa, Barcelona and Capellades were possibly the best known Spanish places worldwide back in the sixteen century. This was not just because the Spanish had managed to land in Latin America not very long before. Rather, it was because what the Spanish saw there–and then exported to Spain−had a success that was unprecedented in history.

Everyone knows about how cacao, potatoes and even tobacco became so important in the Peninsula. However, once the plant that almost everyone would consume had been discovered, the Spanish thought it was necessary to really take maximum advantage of it.

There was no better way of doing so than by making use of rolling papers that since the times of the Moorish habits –taken from the Chinese- were manufactured in Spanish cities. This would lead Spain to become the leading manufacturer of the paper used to smoke tobacco.

That is how Spain began to conquer the world with rolling papers, especially important in the eighteen century, when the product was known as "cigarette making paper" or "Barcelona paper". Bambú, Marfil, Carabela, Gol, Papel Lanuza, El Cazador, El Barco, Habano, and Miquel y Costas all stood out with as brand names. Some of the brands have survived until today.

Alcoy was the place chosen in 1154 to begin manufacturing "mould-made paper", hence why it is the place where the most companies decided to commit themselves to making that product. It was mainly made using fibre and cellulose, often obtained from hemp, rice, cloth, sheets, and all sorts of clothing. It could be used for different purposes, not only tobacco.

It is not the case that others had not tried to manufacture the material before the Spanish. They had indeed produced it, although the results were not at all positive: thick papers made using lead and cadmium that were extremely unhealthy. Therefore, in Alcoy they thought that it was necessary to create a special type of paper that would burn cleanly, that was white, and which had hygienic properties that they did not hesitate to promote.

In the last third of the eighteen century, paper manufacturing in Spain grew exponentially. This growth was also boosted by exports thanks to business between South America and New Spain. Also, South America lacked its own paper-making companies, and that led to a proliferation of orders for "cigarette-making paper". The situation was such that, between 1760 and 1790, there was a 30% increase in the number of Spanish mills where the paper was manufactured. The Valencian mills focused solely on rolling papers, while the Catalans also manufactured paper used for writing. 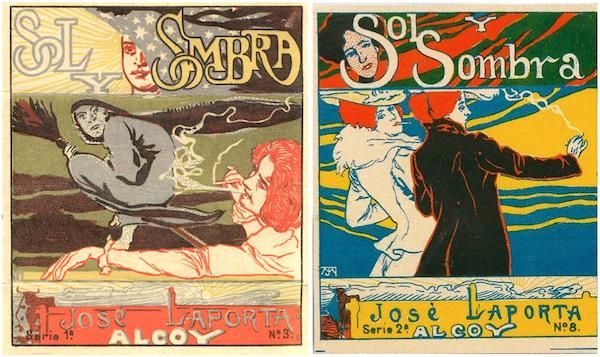 By mid-1880, the paper manufacturers of Capellades and Alcoy decided to adopt different production strategies. In Capellades they decided to continue manufacturing by hand–as Miquel y Costas had done since 1725–, while in Alcoy they used machines. Although finally, both would end up using mechanical procedures to a greater or lesser extent in order to respond to the huge demand, both inside and outside of Spain. By 1908 there was so much demand that the production of rolling papers for tobacco amounted to 1.79% of total Spanish production.

Spaniards soon became accustomed to smoking cigarettes. This was great news for the labour market as it involved the creation of a solid company structure raised around the tobacco industry, as documented in a research report from the University of Barcelona. 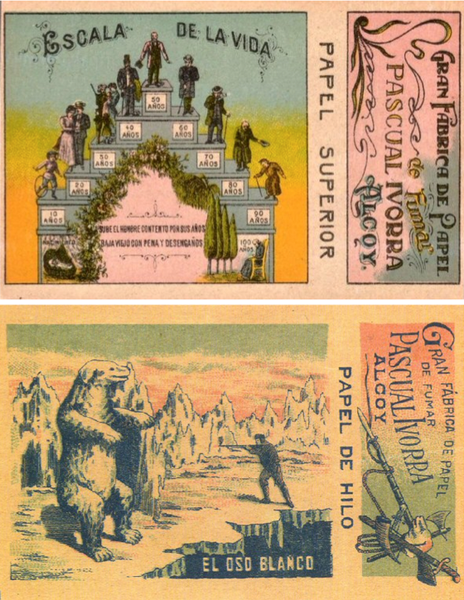 In this regard, the Spanish market for smoking papers was divided into two sectors. On one hand, there were tobacco factories and on the other, there were consumers who liked to roll cigarettes. The factories created cigarettes that were then marketed and manufactured under a state monopoly at first, and later through the Tobacco Leasehold Company (Compañía Arrendataria de Tabacos).

The other tobacco paper sector was the one that had formed around those who needed rolling paper; this helped to create the emergence of small companies, increasing competition. However, it also led to the rise of 62 small factories creating "booklets of rolling papers", 43 in Alicante and 12 Barcelona. The small companies would purchase the paper from the original manufacturers and then sell their products with their own brand. 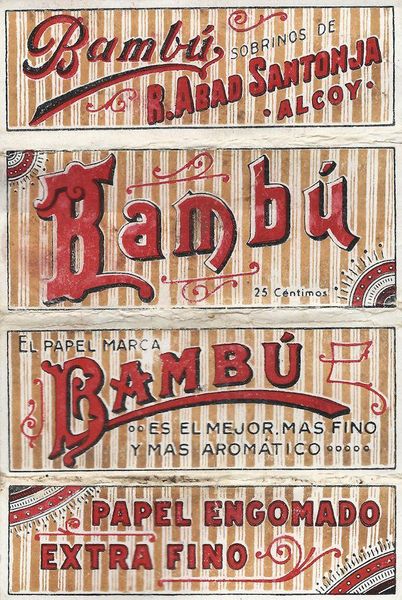 However, in the twentieth century, monopoly and image were taken by brands such as Bambú (Alcoy) and Smoking (Catalan), dedicated to the production of rolling paper, which some consider to be the saviour of mould-made paper, given that its production was sustained thanks to tobacco.

The competition between companies that gradually emerged in the two Spanish municipalities increased the need to stand out in terms of products used–cotton, hemp, rice–, colour and aroma, and the brands distributed. These brands became a mark of distinction (so much so that some were falsified by foreign companies that were starting up).

Of course, each manufacturer divided their products into brand names that were destined for different sectors. In 1703, the Pay-Pay company from Alcoy decided to export Spanish paper. However, manufacturing still remained in Spain. Josh Kesselman, founder of 'RAW' –a brand that still exists today–and a businessman that began to do business in this area around 1995, was clear about something. Why decentralize production if everything needed was in Spain?

Those who made history

The research report from the University of Barcelona documents how cigarettes became widespread in Europe thanks to a boost from Spain, following the invasion of Napoleonic troops. This is something that further contributed to the consumption of peninsular papers. That is why Spain had a monopoly of the European markets up until 1820. That is to say, until competitors began to emerge in France, Germany, Austro-Hungary, Italy, and even in Japan, Turkey and Egypt, who also began to compete in Europe. At that time, from mid-1923 onwards, Spain had to focus of Latin America–aside from the domestic market. 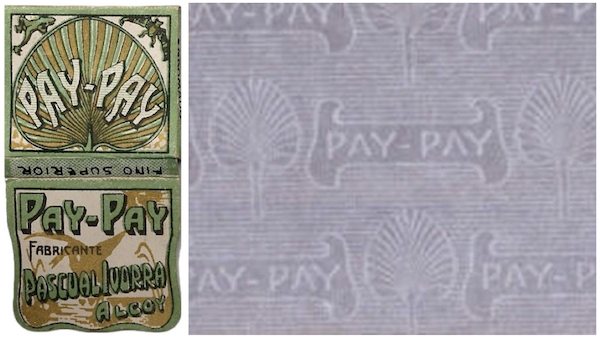 In the mid thirteen-century, important companies began to consolidate both in Catalonia and Alcoy. These companies also consolidated the domestic paper market–especially smoking paper. This is how companies such as Miquel y Costas (in the Capellades area) was born, Pablo Miquel Barral e Hijo, Bartolomé Costas, José Vilaseca y Domenech and Antonio Serra y Sobrino, were competing between one another to become leaders in the sector, although, without doubt, production began to increasingly fall into the hands of Miquel y Costas Hermanos−a Catalan company−that traded under the brand name "El Pino".

Their business venture began in 1725 with hand-made paper manufacturing, an area where they had special success on an international level, particularly when they created their first subsidiary in Latin America in 1879; however the Spanish Civil War seriously affected their economic health.

Nevertheless, some years before the Civil War–in 1929–they created the 'Smoking' brand, and it would go on to become one of the company's symbols and help in their national success. This was especially the case from 1982 onwards, with the little red booklet "Smoking Arroz" that became iconic for several generations and consolidated its success thanks to the "King Size" range. However, it also stood out for its "Pure Hemp" papers created entirely from hemp.

Alcoy was especially notable for the exportation of paper thanks to the José Laporta Valor brand that paid particular attention to the markets of Brazil and Central America. So did too other companies such as R. Abad Santonja with its rolling paper booklets from the 'Bambú' brand and its factories –however, the subsidiary ended up closing in 1984.

'Bambú' also had a significant presence in the Latin American markets, becoming also notable in Alcoy thanks to Paper Manufacturers United, (Papeleras Reunidas), that had boosted a large number of local mills since 1935 and employed more than 1,500 workers. However, the success of Alcoy soon began to wane due to debts and crisis. 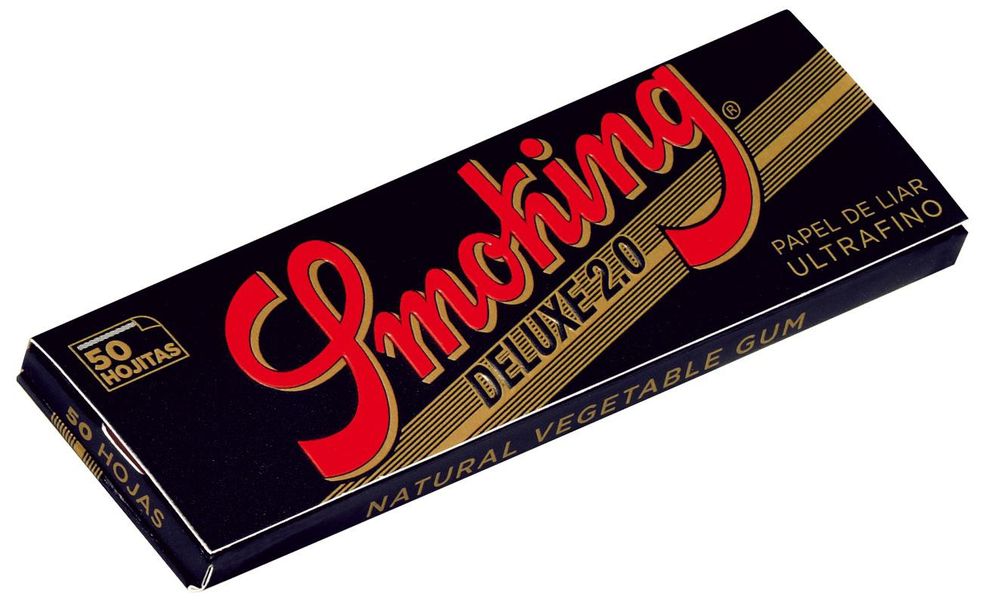 In an attempt to remedy the situation, the Generalitat Valenciana supported the creation of the Alcoy Paper Manufacturers (Papelera Alcoyana); however, the project failed six months later, crushed by heavy debt. Soon afterwards, the only hope in the sector, the Raduán paper manufacturers also had to stop production due to their incapacity to compete in the market. Over time, this instability spread to all of the places in Spain where smoking papers were being produced.

Since 2007, the Miquel y Costas Company has also been experiencing problems due to a drop in sales after carcinogenic substances were found in their products. Nonetheless, Smoking continues to be the market leader brand for booklets of rolling papers today and it is one of the most exported brands, marketed on five continents, despite difficulties.

If the sector is still declining due to the common tendency for users to buy packets of tobacco is not yet confirmed; still, the trend of rolling cigarettes has returned, with a little help from the crisis that had led consumers to try and reduce their costs. Whatever the case, Spain has always been–and continues to be–a reference point and a brand in itself when it comes to manufacturing rolling papers.