Rise and fall of cannabis social clubs. That could be the subtitle of the newly released study by the European Journal of Criminology, entitled "Mapping Cannabis Social Clubs in Europe."

This study reveals that the Spanish model for the ‘cannabis social club’ has spread across Europe, specifically to 18 different countries, and reaching a record high in 2014. In 2015 a restrictive ruling by the Supreme Court of Spain significantly reduced the number of openings of new cannabis clubs in the country. The Spanish clubs represent half of all the clubs in Europe and are by far the largest.

We spoke with ICEERS researcher Òscar Parés to discern the most relevant findings of the study which, according to him, “is both political and scientific in nature.”

How and why did you decide to study the cannabis social clubs in Europe?

We have been studying cannabis clubs with this team of researchers for years. There are very few journal publications on this subject in the English-speaking world, and none at all in Spanish. For me, this is a form of activism rather than science, because I’m not an academic. I believe that it is important for this to be written so that it transcends borders, because there is definitely a denial of this reality (i.e. the existance of cannabis social clubs.)

The aim was to map the extension of this model in Europe and find the similarities and differences between all the countries. The club model is not approved by the authorities, but reality can be stubborn and we can see that it’s expanding despite this, and not only in Spain but also abroad. In the past there was no information on what was going on in countries beyond Spain and Belgium.

Is the Spanish model for the cannabis social club being exported to Europe?

Yes and no: the first in Spain was Arsec, in 1994, but it wasn’t a cannabis social club per se. The first real association, the Club of Cannabis Tasters, emerged in Barcelona in 2001. However, the first European club was actually founded in the Czech Republic and Poland in 1999.

At this point we had to decide on how to define a cannabis social club, and we agreed that the distinctive feature should be the rental of a property for distribution purposes, rather than just the grows themselves as happened in the past. In this sense, we can say that the Spanish model is the one that has prevailed.

How was the study conducted?

We prepared a questionnaire with 30 questions that was translated into 28 EU languages and was circulated through academic institutions. 81 clubs from 18 countries replied, so there are 10 countries from which we were unable to find any information at all.

What’s the time of emergence of the cannabis social clubs?

There was a wave that started in 2009 and ended in 2014, which is when the cannabis club model expanded across Europe with astonishing success.

Nonetheless, there was a significant decline in the number of new cannabis associations from 2015…

That’s right. Half of the data refers to Spain, which means that the graph says a lot about the Spanish state of affairs. Up until 2015, when the Supreme Court established more restrictive measures against the clubs, there was a certain level of tolerance, even from the Court itself. 2015 became a turning point, although I am aware that in 2019 more cannabis clubs than ever opened in Barcelona. 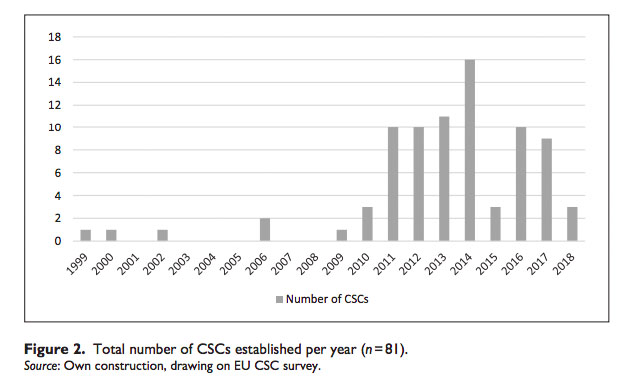 What other conclusions can we draw from this study?

Which European country is the most restrictive and which one is the most tolerant regarding cannabis use?

France is clearly the most restrictive. And, if cannabis social clubs are a tolerance indicator, Spain is by far the most tolerant, followed by the United Kingdom. Nobody talks about the UK but it’s the second European country with the highest number of clubs, as well as an important cannabis activist movement. Then there’s Belgium, but the authorities have really hit the industry hard there, so everything has come to nothing in the end. Holland is the most progressive, in the sense that they don’t need clubs because they already have coffee shops.

And how about Portugal?

There’s not a single club in Portugal. The process is totally biased. It’s true that cannabis use has been decriminalised, but at the same time it has been put in the hands of doctors. If you’re caught with some joints, you have to go to a medical tribunal. It is an administrative model and not a model of freedom.

If you get caught with drugs in Portugal, the police don’t pat you on the back and send you on your way. On the contrary, they seize the stuff and send you to a therapeutic tribunal; they give you a fine and then put you on treatment. It’s a moral model made by public health institutions.

The good thing about Portugal is that it was the first country to accept that the system wasn’t working and actually dared to decriminalise cannabis use. It is admirable in that sense, but it definitely isn’t a model of freedom.

What happened in Spain during 2015 for cannabis social clubs to experience such a huge standstill?

Martín Barriuso was sentenced without a fair trial. He complained to the Constitutional Court, which ordered the Supreme Court to repeat the trial, resulting in Martín and other 4 Pannagh’s members finally being acquitted. The bad news is that the Ebers case led to the ratification of a new law which was much more restrictive regarding ‘shared consumption’, making the cannabis club model as it was then almost unfeasible.

The ‘shared consumption’ principle derives from the 1997 trial against Arsec. The interpretation of that concept was what prompted the emergence of the model, with the Supreme Court having now closed that path. It’s true that, even though they could have closed down the social clubs, they chose not to do so. This is an interesting point. What they did instead was to set some criteria that a prosecutor can easily use to send someone to prison.

So what are the implications of this?

On the one hand, opening a cannabis club nowadays is much riskier than in the past. On the other hand, there’s been an incredible return to underground activities. Because, in actual fact, the sensitive subject is not the clubs themselves but the cultivation. But if you get stopped by the police you stand a much worse chance if you say you belong to a club than if you claim that it is for personal consumption, or even for trafficking. The result is that nowadays you’re better off trafficking cannabis than starting up a club.

Could it be that the legal concept of the cannabis club had never been used before the 2015 sentence to protect marijuana trafficking and amass a great fortune?

Yes, but that wasn't the order of events. It’s not that a unique opportunity was seen and the model became distorted, but rather that, as it wasn’t regulated, the law of the strongest was favoured. As regulation has always been detrimental to those who have fought for it the most, the ones benefitting have been others: people who have got hold of a front man and don’t even appear on the board. This lack of regulation has given carte blanche to those who distort the model despite the commendable efforts of many people.

The same has happened in the Netherlands. The coffee shops have ended up in the hands of organised crime for the simple reason that sales are allowed but not cultivation, which forces coffee shop owners to buy the weed from the mobsters.

Because in order to smoke you clearly need to grow first. It’s like allowing regular coffee shops but banning coffee cultivation.

Prevalence of cannabis use isn’t affected by regulations. Making the law tougher isn’t going to lead people to stop using cannabis. Consumption is simply going to shift… maybe to other substances, or to having to pay higher prices…

In the last month, 10% of the population, or around 3 million people in Spain. This number isn’t going to vary even if you change the law. This already happened in the UK: cannabis was on List B and was shifted to List C, but cannabis use didn’t increase. In the end it was moved back to List B and consumption remained the same.

We want to see what’s going on in the current market; understand the incentives of each player and work towards a regulation that defends consumers’ rights; defend self-cultivation; consider medical cannabis; and also take into account the carbon footprint of production…

And how about medical cannabis?

Since we started Cannamed six years ago, what we’re doing is giving a voice to the affected people. Since 2017 we’ve been working with a group of patients who are part of the Unión de Pacientes por la Regulación del Cannabis (Union of Patients for the Regulation of Cannabis); and in January this year, 20 doctors formed the Sociedad Clínica de Endocannabinología or SCE (Endocannabinology Clinical Association).

What this crisis has revealed is already existing situations of vulnerability. In the case of medical cannabis users, they were left short-handed during the lockdown. It’s as if they’d closed down all chemists’ and you couldn’t get any Ibuprofen or anxiolytics. Nothing new under the sun. Actually, there’s something new: the supposedly progressive parties that weren’t in power before are finally in government but they still havent moved a finger. That’s the saddest part.

Why wasn’t there an alternative to the closure of cannabis clubs during the confinement?

This wasn’t even on the agenda. This decision wouldn’t gain them any political advantage, and these people are only thinking about political capital. Why on earth would they bother, when they have no interest in transforming anything, only in being close to the leader?

You can download the study “Mapping Cannabis Social Clubs in Europe” here.