In any grower's gardens mysterious pot plants may show up featuring surprising mutations. These are unique phenotypes, different from any other usually planted. They're like the cannabis version of the popular Marvel saga: mutant marijuana with bizarre appearances and strange properties. Yet, the question remains: are these signs of the inexorable evolution of the species, or simple genetic anomalies?

The key to this question remains hidden in the same place where these singular mutations were born: the plant's genetic code. There, amongst the helixes of its DNA chains, the answers are waiting, encrypted. Only by studying them will it be possible to discern whether their mutations are due to an error in their cellular replication, the evolutionary effect of genetic recombination, or changes in their genotypes triggered by exterior causes.

Tentacle-like marijuana and its independent branches

This is a genetic mutation, which creates plants with branches that expand through the ground as if they were tentacles, always searching for an anchorage point. It is known as the "creeping phenotype." At first, they grow as if they were normal plants but, as soon as they reach a meter in height their extremities begin to descend until they touch the ground. Once there, they begin to propagate and expand throughout the garden. And, most peculiarly, if there is substrate, they take root. 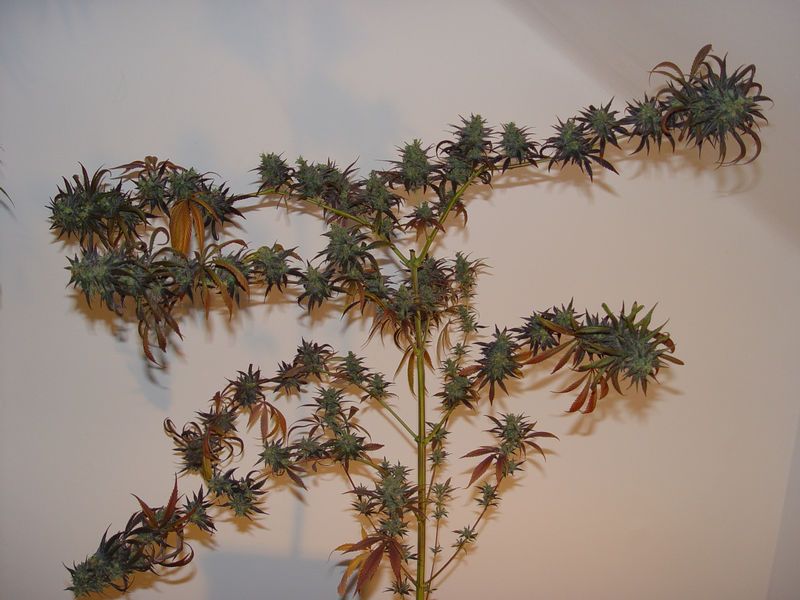 Really strange, isn't it? The branches of these "creeping" plants can take root if they find a humid substrate. Once they create their own root system, they begin to grow upwards, as if they had their own identity as plants. This, of course, creates phenotypes boasting much greater yields. This puzzling mutation only happens in sativa plants and features very thin leaves and stems, like a grapevine.

A green tide: hunting for "superphotosynthesis"

The mutation known as vertical phyllotaxis produces plants with three or more internodal leaves, instead of the regular two, giving rise to pretty, patterned phenotypes full of leaves. One must keep in mind that these patterns of three or four leaves per "floor" will be the starting point for more lateral and internodal branches. That, along with the great number of leaves they contain, turn the plants possessing this mutation into candidates for some serious yields. 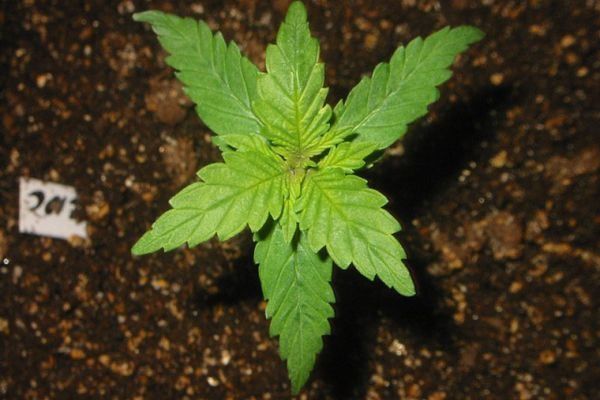 This genetic alteration creates plants with three and up to four branches per node.

Unfortunately, very few growers are able to enjoy the power of this mutation because, although it is capable of absorbing more light energy, it generates a very high number of male flowers. The cause of this overproduction seems to be in the mutation of one or more of the genes that control the plants' growth. They seem to have "evolved" to create leaves with a greater surface area, in order to absorb more sunlight.

Plants that can sprout buds from their leaves

A surprising mutation, whose origin is still unknown, allows the plants on which it acts to develop buds from the bases of many of their leaves. Believe it or not, quite a few people have witnessed leaves and pistils grow from the point where their plants' leaves and branches meet. These flowers are not very big, but they are generating considerable controversy in the tokers' world, as nobody knows what causes them. 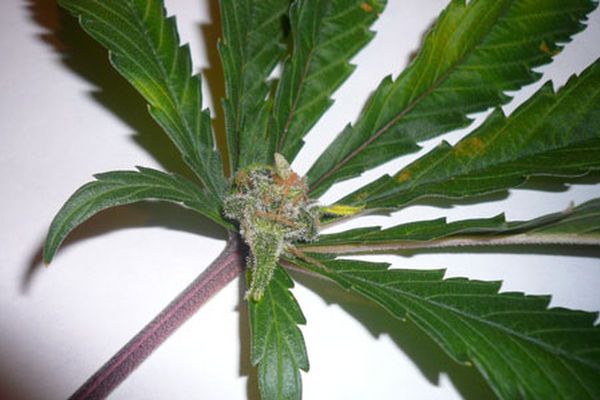 Plants with this mutation develop surprising buds on their leaves.

Unlike the buds that we knew until now, which grew on our plants' nodes, this new generation of "mutant buds" can also grow where leaflets meet (the leaves' different "fingers"). They do not feature many calyces, nor do they form very large flowers, but they have THC, and it is undeniable that their appearance may entail a whole new way of understanding flowering. Some are already thinking about how to exploit them to increase yields.

Polyploid mutation or the giants of cannabis

Polyploidism is a genetic mutation that creates plants with ultra-developed areas (like the buds, for example), turning these plants into authentic green monsters. This is a genetic anomaly that takes place when the plants contain more chains of chromosomes than that typical of their species. Hence the term "polyploid" (many chains), as opposed to the diploid structure (two chains) of marijuana. 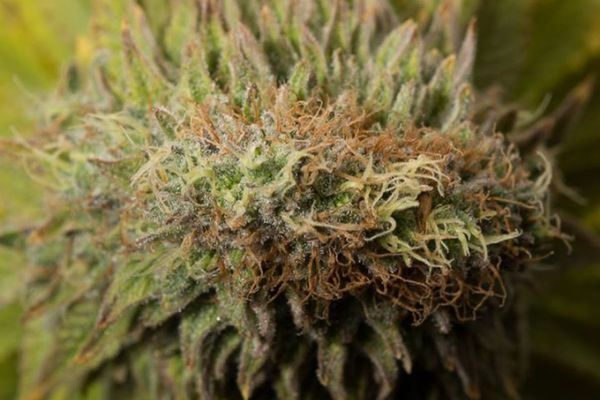 These plants are, as a general rule, much bigger than their counterparts of the same strain. But not everything in their genome is advantageous: they cannot transmit their gigantism to their descendants, nor to those born of crosses with normal plants, nor to those engendered by a cross with another "mutant." It is a natural anomaly, a wink from Nature that can be reproduced with some horticulture techniques, or with the dangerous colchicine, a chemical agent that can halt plant cells' mitosis.

Two plants for the price of one! The strange case of "twin" plants

In the cannabis world the germination of two plants from the same seed is associated with the term "mutation," but nothing could be further from the truth. These are polyembryonic seeds; that is, seeds that yield two plants. This takes place as an embryo develops from a fertilised ovum, while at the same time, another embryo is developing from the tissue of the plant's feminine organ. Therefore, one plant will be "normal," and the other a clone of its mother. 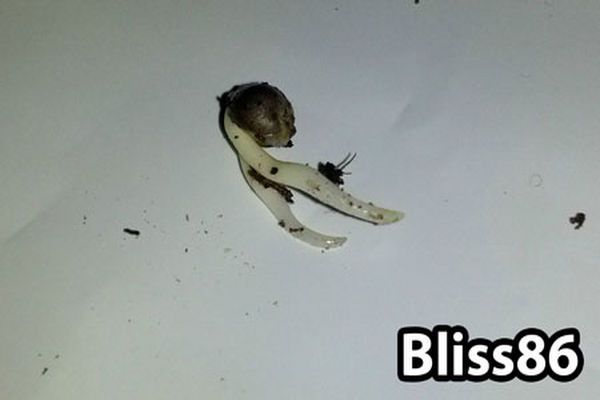 This is usually mistaken for a mutation, but is actually quite a normal botanic event. (Photo)

The stems of these plants are very sensitive. Thus, if an attempt is made to separate them too early, both plants will probably die. However, once they have reached a considerable height (20-25 cm), they can be separated without any problems, as they are two independent plants. It is a phenomenon that, in spite of its rarity, does happen with some frequency, and should not be confused with malformations such as Siamese marijuana (two plants for one root).

Astonishing albino marijuana: where do those white buds come from?

Seeing white buds on plants that combine colourless patterns with green ones is, without a doubt, one of the most striking situations one can witness in the world of cannabis. This is called variegation, a mutation caused by a malfunction of the genes that regulate chlorophyll, giving rise to plants with albino characteristics. These features can be located in certain parts of the plant (like in the buds) or appear with a mixture of green and colourless designs. 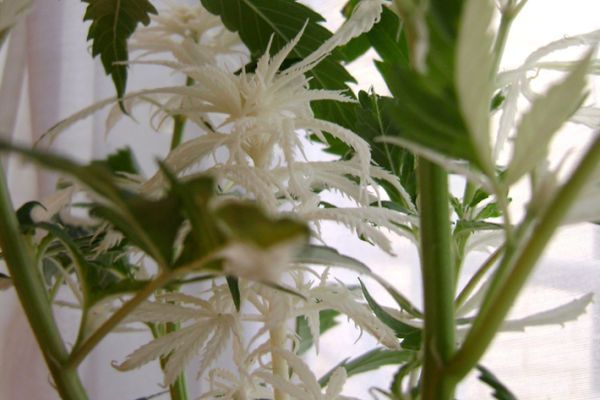 Albinoism can be very aesthetic, but it is not very efficient as a crop.(Photo)

It all depends on the cause of the albinism: if it is due to a double albino gene the whole plant is white. If it comes from a malfunction of the genes that regulate chlorophyll production, it will feature patterns or areas as white as snow. And the carrier of this last variant will be the one most likely to survive, because totally albino marijuana plants usually perish quickly, as their lack of chlorophyll prevents them from synthesising light.

When the mutation becomes standard: the case of Australian Bastard Cannabis

The case of Australian Bastard Cannabis (ABC) is the perfect example of mutant genes that have gradually stabilized until they have come to constitute their own strain. Its appearance is so radically different that some have mistaken it for another species in the world of cannabis. It is not easy to behold its small, shiny and rounded leaves and believe that what we are looking at is actually a marijuana plant. But it is–just one that has evolved! 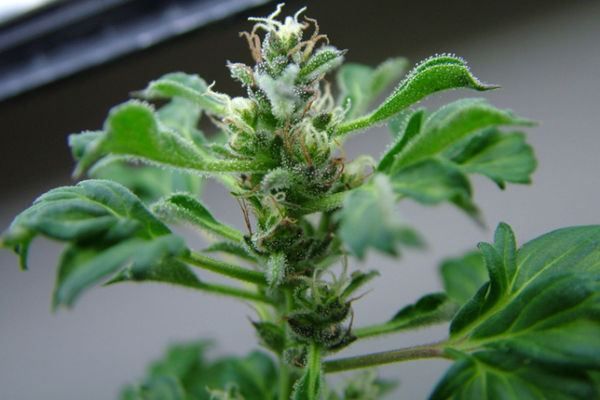 Its small leaves and thin structure are part of its defence against the cold.

Of course, after a first glance at this strain, which looks a lot like a shrub, with strangely and very shiny rounded leaves, nobody would say that it is a kind of grass. But this is an appearance borne of generations of evolution in the wild, during which its genome found ways to survive the low night-time temperatures in the mountains around Sidney–an evolution that could contain the secret to creating cold-resistant marijuana.

The Australian mountains and the hands of an oceanic breederwere the factors that stabilized one of the rarest anomalies one can see in the cannabis world. This is the Duckfoot mutation, named for webbed leaves, which evokes this animal's feet. It is a genetic alteration of the classiccannabis genome that almost always occurs in sativa plants and is of a recessive nature; if you find it, you can keep it in your garden. 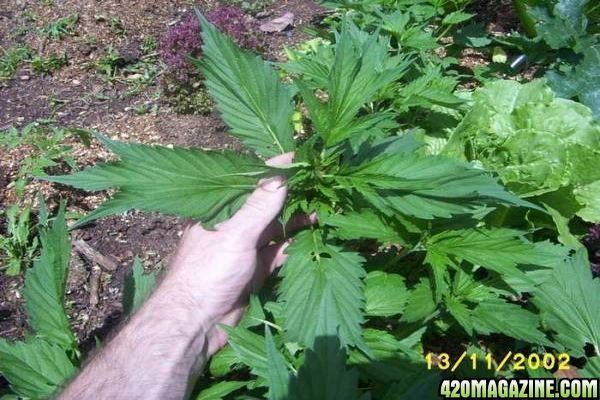 You can observe how these phenotypes look very little or nothing at all like typical pot plants.(Photo)

It was the Australian grower Wally Duck who stabilized this mutation, much sought-after by those practicing discreet growing, as its leaves are very different from those of the conventional cannabis plant. Once they have it they will not let it go, since if it is crossed with "normal" varieties it produces similar phenotypes at a rate of 3 to 1. And that is a real guarantee when it comes to planting grass with total discretion.

Weed was purportedly discovered growing under the sea off the coast of Chile. It was found by fishermen when they hauled up their nets to discover a kind of plant which had never been seen before. It was Cannabis sativa (marijuana); that was the 'official' conclusion of the Chilean Institute of Aquaculture after analysing samples of this underwater weed. This new oceanic variety has been dubbed the "fishermen's friend" in honour of those who discovered it. 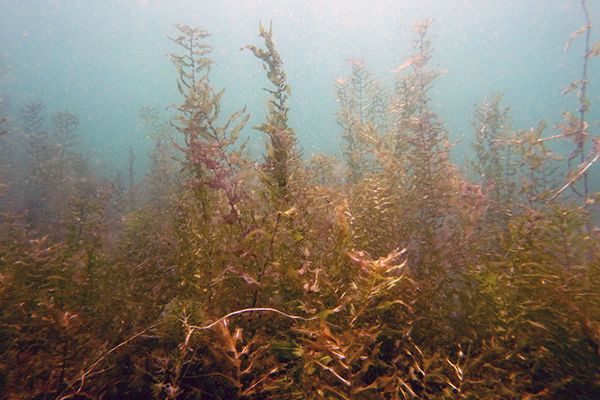 Chile is one of the places where cannabis has been cultivated since time immemorial. But not like this... (Photo)

Researchers believe that the appearance of a mutant gene, the proximity of thermal waters, and their epipelagic location are the three key factors that, combined, created this underwater ganja, which even yields buds! Its tetrahydrocannabinol content is however low. "Its THC levels are not particularly high, but it is true that these plants produce feminine flowers," reported Camila Rojas, a marine biologist involved in the investigation. An investigation that is nothing more than an elaborate daydream, as ?this underwater marijuana is, indeed, not of this world.