The history of cannabis growing in the last half century speaks of the recurrent incompatibility between concealing our plants and increasing production. Up until now, that is. The ideal solution to this old problem with growing has arrived with the strings of the Low Stress Training method. This technique creates an almost made-to-measure plant; it increases the growth of branches, as well as the amount of sun that shoots are exposed to.

The use of the LST system makes it possible to shape the growth of plants as you desire and increase their horizontal growth. You achieve this through a simple system of anchors that "trick" the plant so that its growth hormones are redistributed among the lateral branches. If used well, it is a harmless method, unlike others based on the Top Foxtail (on the main tip), such as apex pruning or FIM pruning, that subject the plants to an inconvenient amount of stress.

The strings of the Low Stress Training method make it possible to camouflage the crop and increase production. It is a system that imitates the effect of apex pruning (which redistributes the "strength" of the plants towards the secondary branches). However, it does not cause as much stress because it does not involve any cutting or amputation. It also creates horizontal growth, as it redirects the majority of the plant's resources to secondary stems, thanks to the effect of an anchoring system.

The use of LST is aimed at controlling plant height, but it is especially targeted at maximising the light energy that plants receive. In a crop that uses this system, the light will be distributed much more evenly between the shoots, leading to quicker and more homogenous growth of the buds. Its use is particularly interesting with indoor crops, where you will see how the efficiency of lights increases, to such an extent that is possible to enjoy one additional and gratifying crop cycle per year.

How to apply the Low Stress Training technique

In order to correctly apply the LST system, it is necessary to begin working with the plants when they have four internodes. Before that point they are too sensitive and could die during the anchoring process; afterwards it would also be risky because the stem begins to harden and become brittle. It is precisely the central shoot, the one containing the majority of the hormones and plant cells that we have to tie to the plant pot before the shoots of the last internode appear. 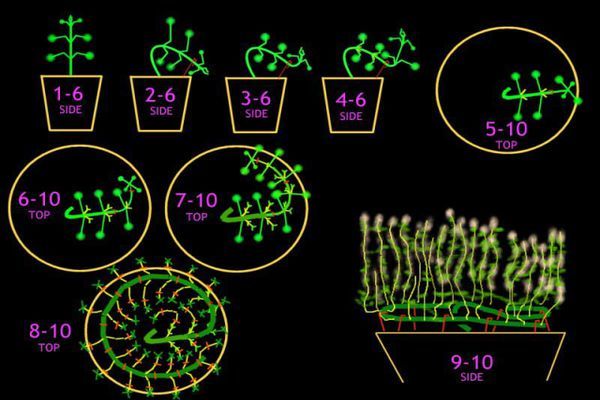 The operation will cause the tip to curve horizontally, creating an axis parallel with the plant pot and producing a hormonal change that will direct energy to the secondary areas. As a consequence, these peripheral areas will begin to become much bigger with an effect similar to that produced by LST's predecessor, the Super Cropping technique. However, this subjects the plants to much less stress, and the most important thing is that you can shape the appearance of the plant as you wish.

Shape your plants and design your crop

The LST method will not only help you to control the size and production of your plants, it will also allow you to give them your own design. Soon after carrying out the first anchorage, the tips of the plants will grow upwards again. When this happens, it is necessary to carry out a second anchoring, and soon afterwards a third. Then, a fourth. The anchors will gradually mould the shape of the plants, allowing them to guide their growth as we go about anchoring them in the flowerpots. 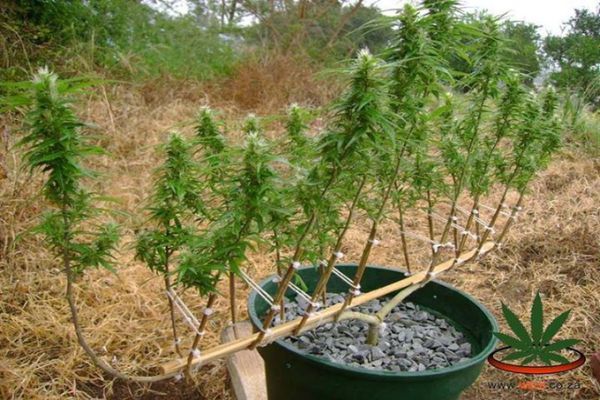 When you begin to put the first fasteners into place, you will have to decide what appearance to give the plant. You can gradually tie the fastening knots to the most salient shoots, or direct the main stems in order to create plants with geometric shapes (spirals, or candelabra, for example). What is absolutely crucial is that you put a "corset" of string on the most important stems so that the growth hormones are redistributed among all of the shoots.

What "strings" should you play to enjoy success with LST?

Managing a successful crop with LST is not especially complicated; however, certain factors should be taken into consideration. Firstly, you need to use stakes on secondary branches that hyper-develop (as a result of the anchorage) so that they can bear the weight of the buds and rain. Also, you need to pay attention to the joint between the plant trunk and these shoots, and apply a healing agent if you see signs of breakage or damage. 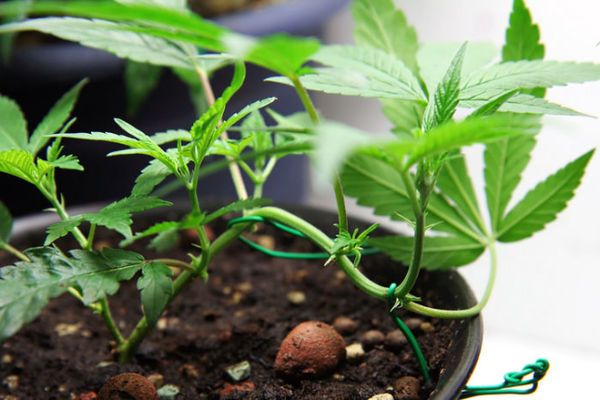 Plants and mould are other issues that you should look out for if you hope to grow with Low Stress Training. This is because the method creates very stocky plants with lots of vegetation; the ideal target for the attack of epidemics and botrytis. Therefore, it is better to use hybrid sativa strains (they are less dense) such as Black Jack, Santa Sativa and C99. These varieties are also better at supporting the anchorage because they are more flexible than indica strains.

Create, design and hide a super-crop

The LST system (along with other methods of apex pruning) makes it possible to harvest better quality buds. It also creates a discreet strategy for camouflaging the crop. This is all thanks to the effect produced by the fastening and guides during the growth of the crop. They act to prevent the crop sending inhibitor hormones to the secondary shoots. Instead, they redistribute all of the potential growth that was reserved for the central stem. 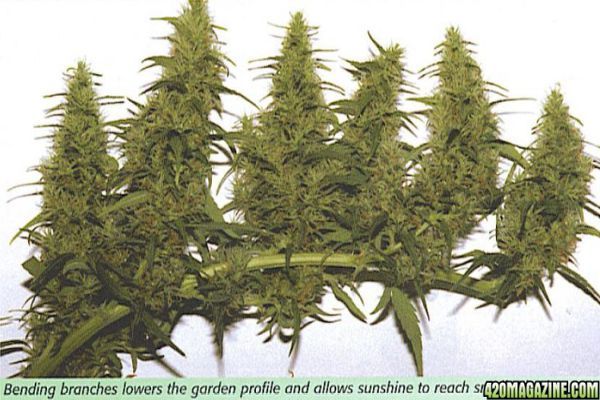 As such, a great range of tips will gradually emerge rather than a large central tail. The best aspect of this is that it can be repeated on all of the stems as the plants grow. In addition, it is possible to guide this unusual growth in the direction you find most convenient. That will enable you to create crops that adapt perfectly to the demands of your space. Moreover, as they do so, they are creating extra quantities of flowers and tetrahydrocannabinol.